SUPER CRAFTY: Using the different colored magnetic pixel pieces, you can now re-create your favorite icon and characters just as they appeared in the original games.
FUN FOR EVERYONE: Whether you’re 4 or 104, this Super Mario Bros. Pixel Craft is a fun and interactive way to bring your favorite icon and characters from the video game to life.
SUPER CONTENTS: With 720 magnetic pixels included, follow the design patterns to re-create characters and icons such as a coin, mushroom, flower, star and question block from the video games.

Product prices and availability are accurate as of the date/time indicated and are subject to change. Any price and availability information displayed on Kidtoys4.com at the time of purchase will apply to the purchase of this product. 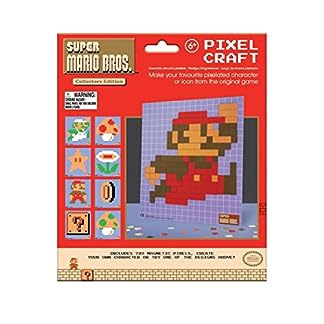